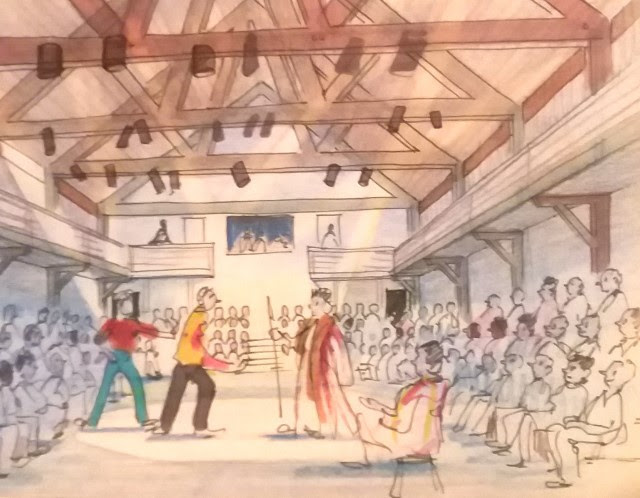 Watercolor of the Unicorn Theatre (before its 1990s renovation) by an unknown artist from the BTF archives.

Fred’s Journey with the BTF:

I began my association with the Berkshire Theatre Festival as a lawyer. I was very excited about being able to represent the theatre. After a while, I was invited to attend an Executive Committee meeting in 1975 when I was 29 years old. Ann Straus was the President of the Board, and after I gave my little report she kind of jokingly said, “if we put you on the board you won’t charge us, will you?” Someone suggested that the secretary should be a lawyer and a local person, and suddenly I was elected to the board. Jane Fitzpatrick became the President of the Board shortly after I joined. She always had me sit next to her because she said I had a good memory, and she could call on me if needed. I stayed on the board for about 30 years. I only left because they instituted term limits, and so I was asked to serve on the Emeritus Board.

My Most interesting Show:

I remember when we brought in the Proposition Workshop [Theatre] and they did improv in the back of the Unicorn, the old Unicorn, what may be the prop or costume shop now. Allan Albert was in charge of that, eventually he became the artistic director. His specialty was an interesting form of theatre that he called “nonfiction theater,” which was based on first person accounts of things. Before he got here Allan had put together The Whale Show. He researched journals of whalers who were out at sea for years. It was a series of monologues with the cast on stage just telling these amazing stories. It was very compelling. One summer when the Proposition was here, they did the same type of thing based on truckers. They went to truck stops and gathered all of these stories and created Night Riders, that included original music. It was incredibly successful, and we brought it back later that summer because it was so popular.

Josie Abady, [the Artistic Director in 1979] brought Michael Zaslow (pictured to the left) to the theatre [for Petrified Forest], it was the first play of the season. He was a big soap opera star at the time, so his name was pretty well-known in and around the area. Grais Rider was a woman in Stockbridge, who used to do my shirts. She did laundry, and I’d go to her house and pick up my shirts.  She was the sweetest person. I went there one day in the spring and she said “Did you hear? One of the actors from one of my stories is going to be at the Playhouse. [Roger Thorpe] is going to be at Berkshire Theatre!” She only knew his character name, but was so excited about him coming. I offered to take her to the theatre, but she said she couldn’t do that. So, I went to opening night of this show and Jane Fitzpatrick used to hold this huge party on opening night. I was introduced to Michael Zaslow and mentioned that this woman I know loved him and was a huge fan. He asked what her name was, and so I gave him her name and phone number. Well, the next time I went to pick up my shirts, Grais was stunned. She said, “I can’t believe it! I’ve never talked to a celebrity before!” He’d called her and simply said, “Grais, this is Roger Thorpe,” his character from the show! And the funniest part is that his character had been killed off that past season, so he came back from the dead and called her! I told her, “Now you gotta come to the theatre, Grais.” I was such a fan of this guy after, I mean he made this woman’s month. This always stuck with me and really shows that the interplay between the theatre and the community is so interesting. That was a big part of what the board tried to do during my tenure was to continue to build up that relationship with Stockbridge.

In addition to being an Emeritus Board Member, Fred Rutberg is also the President of the Berkshire Eagle in Pittsfield.