Stories of Stockbridge: Chapman and Ionesco

Dave’s Journey with the BTG 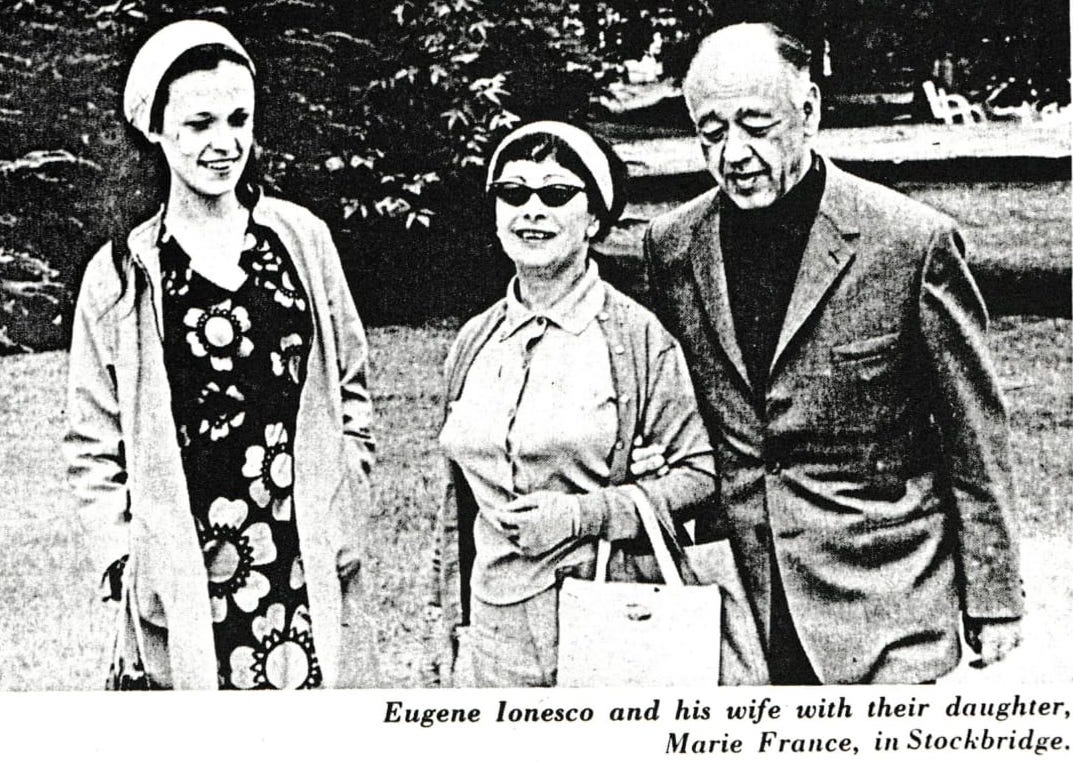 Dave Chapman spent forty years working in the arts. He worked in theatre and dance doing everything from maintenance to lighting design. His love of theatre was sparked during a summer job in high school with the Berkshire Theatre Festival.

“I went to high school at Pittsfield High, and back then due to the overcrowding they had split sessions, so I had my afternoons free. I heard that the Berkshire Theatre Festival was looking for people to spruce up the playhouse for the summer season, and so I started working at BTF during the afternoons. My time there overlapped with the incoming summer staff, and I found them very interesting.

I hadn’t really been exposed to theatre before, so I begged myself a job for the summer. I became the assistance maintenance man. Once I got done with my work for the day, I was allowed to go and work in the shop, and that’s what I did. I learned about stage carpentry, you know building scenery, building props.

They liked my work, and invited me back the next year. Gradually, it was after the seven summers that I worked with BTF, I became the assistant technical director. I was going to Berkshire Community College throughout those years, and you know I was the techie at BCC.

I finished college in Pittsburgh, and moved to New York. I had actually gotten into lighting for dance by this point, and was pointed to Jacob’s Pillow. I was there for five seasons as the technical director of the Ted Shawn theatre. In 1978 I met a dance company called Pilobolus. I was with them for 20 years as their lighting designer, supervisor, logistics, until 1996 when I went back to Jacob’s Pillow.

In 1999, I got a call from Bob Boland, who I’d worked with before, and was invited to be on the board of directors with The Colonial Theatre. They used my road experience to work with the consultants. I decided to see if I could join the staff at the Colonial, and worked with them for a couple of years until the budget was cut and they couldn’t keep me on.

I realized that I’d done what I could in the theatre, and went back to school for healthcare. It was a forty year career with the bookends being the Berkshire Theatre Festival and The Colonial Theatre.”

Dave Chapman now works as a Hyperbaric Medical Assistant at the Wound Care Center and began his career in medicine in 2009.

“In 1969, we did a production of a play called Hunger and Thirst by Eugène Ionesco. He [Ionesco] came with his wife to the opening, and I got to meet him. He was the most proper man that I’ve ever met. A small man with this beautiful blue silk collarless jacket, no tie, his collar buttoned up to the top. His wife looked to me like Mamie Eisenhower. She dressed very similar to Mrs. Eisenhower with the little round hat and was so prim and proper.

His play, Hunger and Thirst was something else. You know we did this production that was bizarre beyond anything I’ve seen before or since. We filled the proscenium with a wall, which was hinged in 4 pieces so that it could track off and open up, so that one side would fold back and the other side would fold back, and they’d track off to the sides. So it was the entire width and height of the proscenium there. It was a thick plywood covered with appliquéd Styrofoam, covered with toy submachine guns and parts of baby dolls. There were a lot more toys and things, but those two I always remember. The thing weighed a lot.

The designer, I can’t quite remember his name, but I know he and his wife went on to be the production designers of Saturday Night Live. Anyway, we had this giant structure up, and the designer came in and looked at it. It was a massive piece, and he said ‘Can we move this six inches upstage?’ and a hammer dropped from the grid in his general direction. He left the theatre at that point and didn’t come back until we’d finished putting this up.”