Before you make your way to The Unicorn theatre to see Edward Albee’s Seascape this October, we hope you’ll take a moment to consider these words from director Eric Hill regarding the play’s themes, Albee’s perspective, and the large questions that are posed during the show to better enjoy it when you arrive! 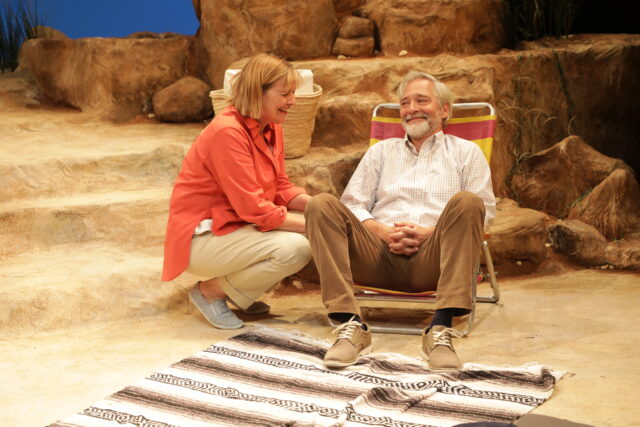 “At the beginning of the play, Nancy is on the beach painting the titular seascape. What the audience sees is the artist painting basically something lifeless in terms of people or any kind of animal. Life is below the surface–under the water or sometimes in the air. The land is barren. When dealing with Edward Albee, if he encourages you to look below the surface, take him at his word. That is where he is trying to aim you…to see the people behind the painting. The life of this play takes place on three levels of consciousness or physical awareness: under the water; on the land; and, in the air.

Who are these two human characters? Albee doesn’t give us any background information: we don’t know where they live; we doin’t know where they are from; we don’t know why they’re here. We have no context other than what they tell us about their lives. There is a blank space there that is deliberate on Albee’s part so we can cut to the chase; to focus on what they are talking about. In this case, it’s about the lack of connection in a modern American marriage. Not a new topic for Albee.

Seascape is Albee’s response to Samuel Beckett’s Waiting for Godot, which he wrote while living in Provincetown with a view of the beach. Albee made a habit of responding to the things he read. During this time, he was in the prime of his career. Albee essentially took his own creations–George & Martha from Who’s Afraid of Virginia Woolf?— and threw them on a beach where they have no context. And, then added lizards. Albee works his way through animals in his writing. Specifically, he wrote At Home at the Zoo (Zoo Story), which involves a dog, and The Goat or, Who is Sylvia?, involving obviously, a goat. The animals in question, here lizards, are very real even though the reality of the scene could be called into question. The animals are not played as a metphor even though they must be on some level. Here, the lizards allow an examination of the meeting of the human brain, which is the more refined, artistic, critical side, and the lizard brain, which is aggressive, energetic, curious and reactive.

At the end of the play, what are we left with? Despite all the absurdity, we will go on. The question becomes “will they or won’t they stay? Where are they going to go?” The ending is in actuality a new beginning, but the beginning of what? To begin in this sense means to be more present to the fact that we are still in the process of evolving. Evolution is an ongoing event.

In every Albee play, there is one key word that gives the audience clues as to what the play is about. In this play, that word is “chattel”–meaning not only all the stuff that has been acquired, but also the ownership of people. Albee uses this word precisely, he is not being careless as a writer. Process of accumulation and ownership gives way to an entitlement that allows the owner to begin to think that they can own other people i the process. This in turn is a distraction to being present to the moment of evolution. A distraction to the implied inner journey. To begin in this context doesn’t mean to go on physically to the next beach, but to go on “inside;” it’s part of something bigger. Despite the size and scale of the universe, the most important thing is this moment, right here and right now. We have a responsibility to find beauty in the world and live in the moment; to evolution and growth in the moment.

We go on, but we must be aware of what it is that we are beginning. ”

Don’t miss the chance to lose yourself in the absurd world of Albee yourself for a couple of hours. Get your tickets for Seascape today!

Previous:
In Appreciation: A Conversation with Randy Hawthorne and Carliss Baldwin
Next:
From the Archives: Two Dead Crows