In Appreciation: A Conversation with Randy Hawthorne and Carliss Baldwin 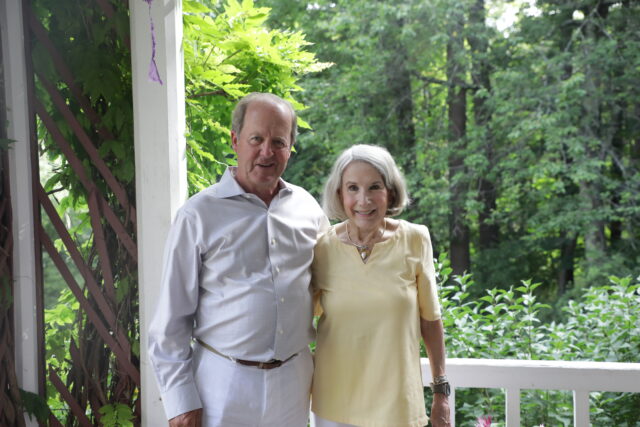 In Appreciation: A Conversation with Randy Hawthorne

Berkshire Theatre Group is grateful for the dedicated board members past and present who have contributed their intellect, perspective, time, and heart to our story. I am particularly grateful to get the chance to sit down and speak with such members, who have gone above and beyond in their involvement with BTG, and learn more about why they continue to stay so deeply involved. Below is the latest conversation with former board member Randy Hawthorne and his partner Carliss, long-time BTG members.

The following interview has been edited for space and clarity.

S: How did you first get involved with BTG?

R: In 1984 I joined the board and it was the Berkshire Theatre Festival in Stockbridge. And we were quite fond of it. We took the kids to plays, in hindsight some pretty adult stuff, but you go “Hey! It’s art! ”. And it didn’t seem to harm them. So, that was how we started. There was a brief period where I was off [the board] and then I was back on and then I was on through the merger with the Colonial. And we produce great theatre and it somehow stays afloat!

S: What do you think makes BTG unique?

R: The concept was and is pretty simple. We produce theatre, and we have stages that we do it on down in Stockbridge and in Pittsfield. At the start, Berkshire Theatre Festival didn’t do much in terms of presenting. We might have had one or two people come in and rent the stage from time to time but it was pretty limited. Conversely, The Colonial presented different kinds of acts— musical, dance, variety acts— that would come through, but the theatre itself didn’t develop and produce work. Putting the two organizations together made a lot of sense. It seemed like a good mesh and is a good mesh. Now, we’re a theatre organization with diverse quality entertainment and wide-ranging experience in the schools. Maybe leading to future theatre fans! 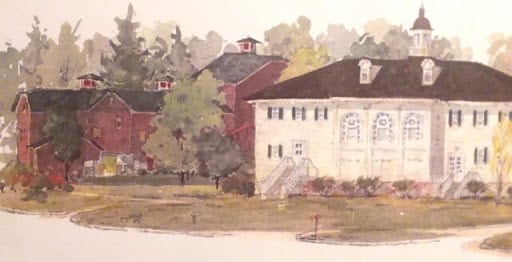 S: How do you feel like it’s changed since being BTF to combining to create BTG?

R: You know, the location is a little different. But that’s probably helpful in terms of getting more local people involved. I mean certainly, the stuff that we present during the winter has an appeal to people who live here full time, so you get more of a base that way. I’ll always think of Stockbridge as the center of BTG because that’s where we started, but it’s truly moved up to Pittsfield by now. So, it’s changed, but in a good way. It’s more inclusionary.

Before, BTF was just a summer theatre, which was great. We were a summer theatre with the education component and that’s just been able to be enhanced by the fact that it’s not just Stockbridge but it’s also Pittsfield. I mean, 13,000 of the 16,000 children in Berkshire county get touched by our efforts. That’s really impressive!

And the type of plays, the type of entertainment, that’s very similar. I don’t think it’s changed a lot. Having the Colonial Theatre allowed us to put on a much bigger showpiece kind of theatre. I particularly liked the production of Tommy, I thought it was great, and you couldn’t have done a production like that on the Mainstage, or even more so on the Unicorn.

S: What spurred you to make BTG a part of your planned giving?

R: Well the first thing you have to start with is you have to have a will. Turns out less than half of Americans have wills. If you don’t have a will, it’s hard to give a legacy gift. And for $159 you can get a will, power of attorney, and health proxy from the internet, but it’s a real piece of paper. So, you can do it, but we did some estate planning once, then the kids got older so we updated our wills, tax law changed along the way, and by then we were reasonably sure that the kids were relatively set up on their own and we said, “Okay, we’ll allocate our money to some good causes”. And one of them was the Berkshire Theatre Group.

But there’s a new trend, which is not exactly legacy giving, but the advent of IRAs which turn into—when you pass now the age of 72—required minimum distributions. So you have an IRA and you put it up at 25 years old because of work and you’re now 72 years old, and this is some changes in tax law where they said “Hey, you can’t keep this forever until you die. You’ve got to start taking some income back in. You put it away tax-free, you’ve got to take the income now” and get taxed. It’s just a mathematical calculation. Well, one thing you can do instead of just taking the money in and then deciding you want to give it out you can, up to a limit of $100,000 you can make a qualified charitable distribution and it won’t go through your income tax. It’ll satisfy the R and D and it won’t count flow through your tax return, which has minor benefits.

People say “It comes in as a dollar, goes out as a dollar, what’s the difference?”, turns out it’s more efficient to give it directly as a qualified charitable distribution. So, you could give your legacy while you’re still with us.

“I give because it is important to support a local cultural institution and continue the tradition of Live performance at the highest level … Nothing beats Live!” – Randy Hawthorne 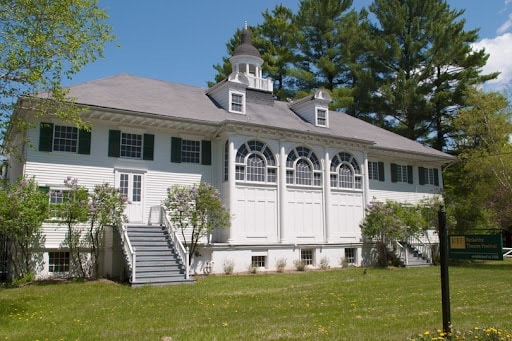 S: I was going to ask what’s something you feel like people should know about in terms of planned giving that you don’t feel they do, but those are some great things because you don’t get a whole lot of financial education going out into the world. You don’t get told when you should plan to be making a will, or the if/when/how to do it.

R: Yeah, it’s independent and different than legacy, because it’s while you’re alive, but there are a lot more people living past 72. There are a lot more people who have this issue. Thirty years ago you had people who had pensions, they didn’t have IRAs, they didn’t have to worry about this. So, that’s just something that’s an opportunity, and it’s very self-directed because you’re alive.

So, why Berkshire Theatre Group? Because we believe in arts in the Berkshires, we want to support all of that, we know it’s important not just to the economy but to the whole feeling of the place. And it was a meaningful enough experience for us that we decided to give something back.

S: What is a production you’ve gone to that was particularly impactful?

C: Of course, The Importance of Being Earnest.

R: Yeah, she liked that.

C: Damn straight! And what did we have at Tanglewood the next weekend?

C: The centerpiece of the damn first act!

R: I’m gonna go with Tommy and Candide. Tommy was on the Colonial stage, and Candide  was in the Unicorn. And there’s a lot of stuff that we saw years and years ago, but it’s been years.

C: There was the one by Noel Coward about ghosts…

R: Blithe Spirit, yes! Blithe Spirit was good. But there was a time when we were only doing American theatre and we wouldn’t have been able to do Blithe Spirit.

C: You couldn’t do The Importance of Being Earnest! 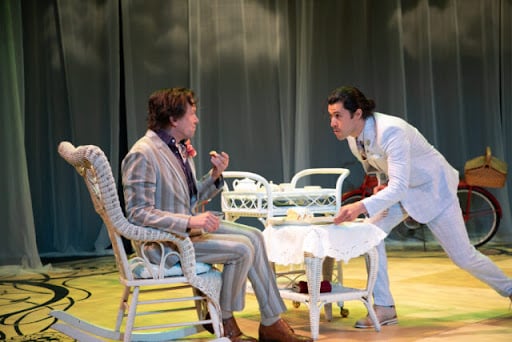 Shawn Fagan and Mitchell Winter in The Importance of Being Earnest, 2021. Photo by Emma K. Rothenberg-Ware

Previous:
Queering Dracula
Next:
A Director’s Note on “Seascape”