From Casino to Stage: The Story of the Playhouse

The grounds Berkshire Theatre Group operate on were once inhabited by the  Stockbridge-Munsee Community of the Mohican Nation. The Munsee people were gradually driven from this land by European colonizers and currently reside in northeastern Wisconsin. We honor the traditions and the peoples indigenous to these lands now known as the Commonwealth of Massachusetts; the Pennacook, Mahican, Pocumtuk, Massachuset, Nipmuc, Wampanoag, Nauset, and Chappaquiddick. Indigenous people are not relics of the past. They are still here, and they continue to demonstrate talents and gifts amidst a backdrop of ongoing colonialism and oppression. We celebrate their community and seek to honor the rich tradition of storytelling that we share.

In a recent wander through our treasured archives, Executive Director Nick Paleologos came across a gem of an article written about our cherished Stockbridge institution that gives a glimpse into Berkshire society at the time of it’s inception in the 1800’s. This beloved building is referred to as The Casino, the Main Stage and by most, and for the purposes of this article: The Playhouse. While we join the many who are missing the activity at The Playhouse this summer, we are looking forward to giving the historic Stockbridge space the love and care that is needed to ensure that it may be with us for many years to come. Not only does this pause give us the chance to revisit and tend to some of the building’s physical aspects, but it gives us the chance to rediscover some of the gems it has left throughout its history. 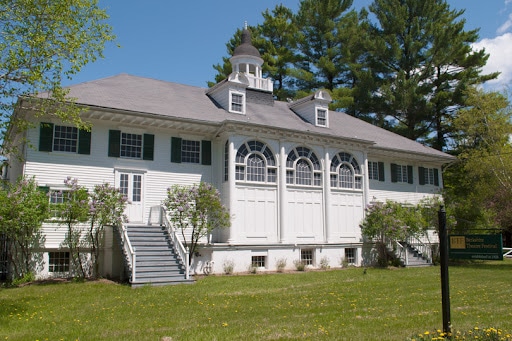 Before the Playhouse was home to theatre’s classic works, evenings were spent around the billiards table, playing cards, and even on the tennis courts. This was not a casino in the specific modern sense, but a center of leisure and “social amusement” that, yes, included games of a gambling nature.

Some found it to be “an awful innovation” and a sign of “sadly degenerate days.” Such a center of social merriment was but a sign of the degradation of the current generation who, unlike previous generations who “found amusements themselves”, “must have their amusements provided for them.” Such language brings to mind the faux-fear-mongering words of one Professor Harold Hill warning the townspeople of the sins found in the pocket of a pool table. Think of that! Ye Gods! 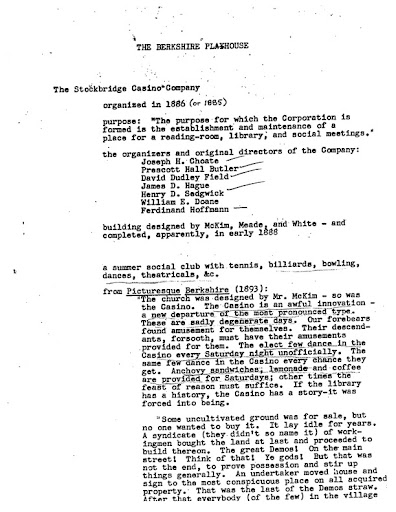 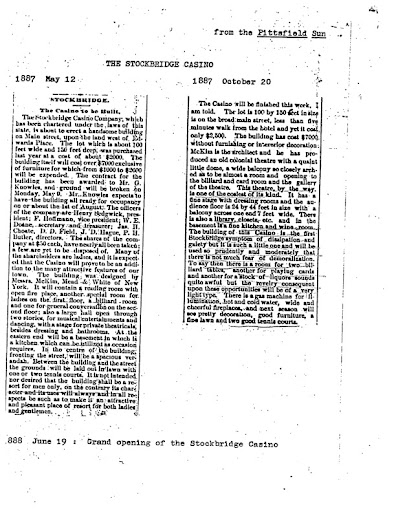 Despite such moral alarmism, the Playhouse bloomed forth as a place of leisure for the more debaucherous of Stockbridge society. And, in defiance of many other institutions of the time, it was a “pleasant place of resort for both ladies and men” (though there was a separate “special room for ladies” on the first floor). What ho! Such liberalism! And together the sexes mixed in their pursuit of frivolity. More than a hub for gambling, it was a space for people to partake in any and all leisurely pursuits one might imagine from lounging in the reading room to holding conversation and even sporting outdoors.

But most pertinent to our modern interests was the theatrical space. Noted as “one of the coziest of its time,” the two-story space was the centerpiece of the Playhouse and came equipped with dressing rooms and a kitchen. And while the other activities that the building gave space to have long since fallen by the wayside – the casino-related activities had ceased by the 1920s – the stage had become a mainstay of Stockbridge society. So much so that when Mabel Choate bought the building and sold it for a whole $1 with the intention of moving it in favor of centralizing the Mission House, a space built by John Sergeant to westernize and “assimilate” the First Nation peoples of the area, it was transported by horse-drawn carriage, and rebuilt on its current site. Here the building continued its theatrical life as the Berkshire Playhouse managed by the Three Arts Society, a group banded for the specific purpose of stewarding the space in its transition from former casino to the Playhouse we know today. While it underwent continual renovations over the years and changed managerial hands many a time, its place in the hearts of theatrically inclined Berkshire residents remained.

The Playhouse has lived many lives since its inception: a place for conversation, games, new American works, old European classics, and the highlights of a varied theatrical season. And while its current phase is one of repose, this piece of the past offers us a chance to remember the many possibilities the space holds. And while the nature of its future is still under consideration, it will certainly be one of community and joy. 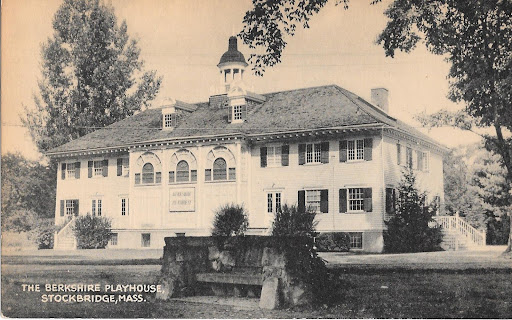 Help preserve our historic theatres by giving a gift today!

Previous:
The Berkshire Flyer And the NYC/Berkshire Connection
Next:
Queering Dracula