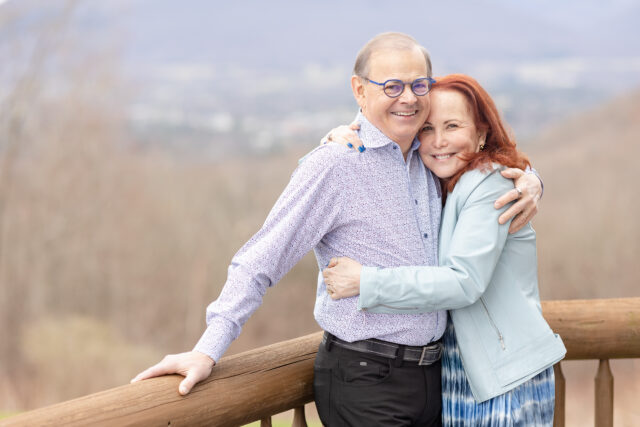 On May 22nd, Berkshire Theatre Group is honored to be re-dedicating the property on Wendell Ave. formerly known as the Thadeus Clapp House in the name of David Lloyd and Meg Mortimer, which will then become the Mortimer/Lloyd Artist House. David and Meg have been long time supporters of the organization, and have continued to dedicate themselves towards helping Berkshire Theatre Group grow into the best that it can be. We are so grateful for their support which ensures the continued life of the building that houses staff and artists year round, and for their commitment to ensuring we continue growing for another hundred years. Here is an excerpt from our recent conversation.

The following interview has been edited for space and clarity.

S: How did you come to know Berkshire Theatre, and how did you get involved?

M: I knew about Berkshire Theatre as an agent in New York when Josie Abady was running the theatre, and then Arthur Storch of course, but I was never in the Berkshires to see a show back then. My mother was visiting the Berkshires in 2005 and we went to see Souvenir. We fell in love with the Theatre and then we bought a place up there. And then Margie came in.

D: Yes, our great friends Margie and Everett Jassy were, at that time, very active with BTG, so the two of them encouraged me to get involved and come on the board.

M: So we did that right when we moved.

S: What is it about BTG that you feel is unique?

D: Well, if I had to reduce it to two words it would be “Kate Maguire”. But, it’s not just her; it’s the mission that she pursues. At that time the mission statement was “Theatre that matters”, and I really like the way in every season, Kate puts together a portfolio of all sorts of shows, at least one of which nudges us out of our comfort zone, another that’s just entertainment, and others that are in between. But each one matters in its own way because people end up talking about some aspect of the performance. There’s a broad definition of “mattering”. It can matter because it’s entertaining, it can matter because it’s funny, it can matter because it’s heart wrenching. Shows can “matter” in a number of ways. 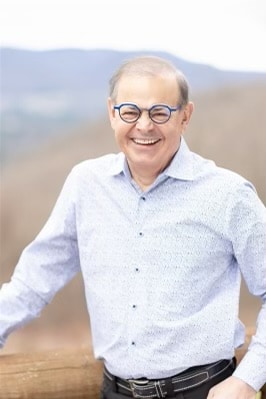 S: Why have you made BTG a part of your planned giving?

D: Especially as we’ve become more secure in thinking that we’re not going to outlive our nest egg and provide for family needs, we’re leaning into giving back to the community now and in the future. As for planned giving, I hope a long time from now [laughs] but when the time comes.

M: We discussed possible charitable beneficiaries and [settled on] BTG as our primary one.

D: As soon as I went on the board, shortly after Meg and I had gotten married, we did our first wills together. And we put BTG in right away – almost 20 years ago – but it was a relatively small amount because we hadn’t gotten to the point where we were sure what our estate was going to look like or what the needs of the family would be. So, as we progressively revised our will and those uncertainties have clarified we keep increasing. And that’s something I would remind people who may have already put BTG into their wills to consider whether they’re in a position to do more.

And it doesn’t always have to be in a will. If you want to give, but you want to be able to pivot if you have to, things like creating some transfer on death accounts where you can change the percentages if you need to is a great way to have a base in the will but then adjust the total gift up or down as your circumstances change. It’s easier to give more, and if you really need the money it’s much easier to valve it down if you have to. It’s a tool people forget about.

Another thing about TODs [Transfer on Death accounts] is that your impulse, of course, is to divide whatever the residual is equally. But you can make BTG a contingent beneficiary of anyone who, God forbid, isn’t there or wants to disclaim their portion. Maybe somebody becomes a billionaire and says “I don’t need this, I wave it in favor of BTG”. 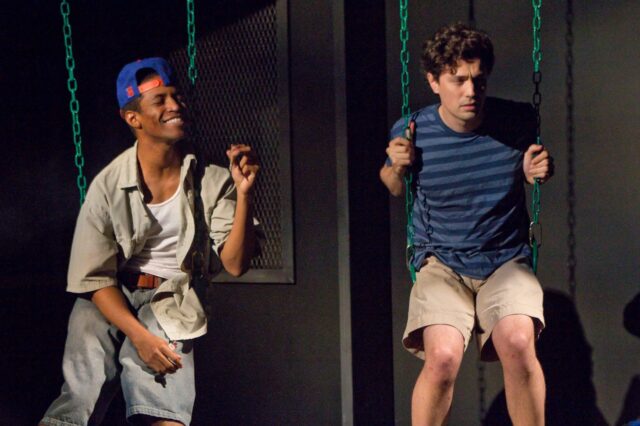 S: What is a show for both of you that really impacted you and speaks to how you feel about BTG and the work that we do?

D: For me it was Dutch Masters, which I thought was very prescient. It raised Black Lives Matter issues poignantly.

M: That was a very impactful show, that was great. More recently, I really loved Shirley Valentine. I felt like I could relate as a woman, not necessarily as my experience, but I felt like I could feel her transformation. Corinna May was so terrific, so committed. I mean with such a short amount of rehearsal time that you guys get up here she really blew me away. We also saw, I mean this was a funnier show, but what was the dog show again?

M: That was with David Atkins and Rachel Bay Jones. We saw that twice and they were both amazing. 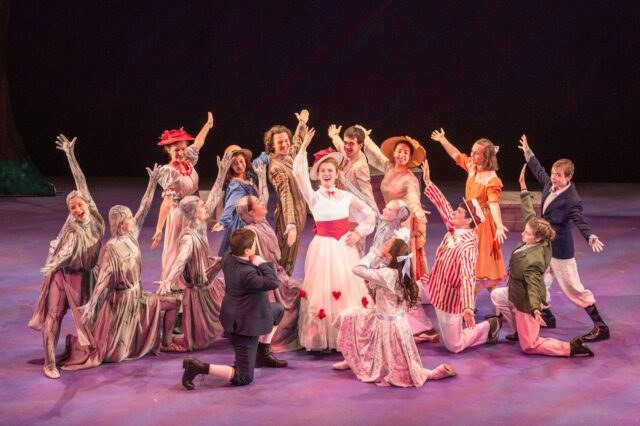 D: My first time I saw a community show more as a duty thing as a board member, then I was completely blown away and I haven’t missed one since. And they continue to have that impact. I just can’t believe what they get out of the kids. It’s really pretty amazing.

M: Oh my God, don’t you remember being in a school play? But this is bigger than a school play. It’s all different ages of people, and adults, and people from different places. It’s like, wow I wish I could have been in one of those. Just the love up there they have for what they’re doing. And it’s so professionally done. You get real lighting, real costumes. I just think theatre changes peoples lives in so many ways. And I guess going back to why we’re giving, I think that’s a big reason we do, because that transformative effect of theatre I know to be true. If you take kids to see a show it could change their lives. It could change their lives forever. Because they could see the possibilities outside of what’s here, what they’ve known far more so than a video game, a movie, or a TV show. That, to me, is one of the most important gifts we can give to young people of all socioeconomic backgrounds but mostly of kids whose parents wouldn’t necessarily take them to the theatre. 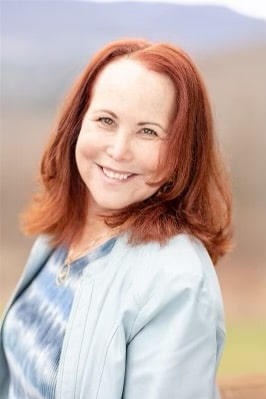 D: Not to go down a rabbit hole too much, but I also believe that it’s reasonable for a kid to think the only way to be involved in theatre or entertainment is to be an actor, because that’s the primary interface they have with TV, movies and so forth. So if that young person is interested in these fields but thinking “I don’t want to be an actor” or “I’ve got stage fright” or whatever, they learn while working on a BTG show that there are dozens of opportunities to be a part of all this without necessarily being on stage. And beyond that we try to remind kids that that’s not just true of theatre or entertainment, the same is true in a lot of professions. Even if you can’t be the thing that got you [interested]. Maybe you don’t want to be a doctor but you like the idea of medicine – you can be a nurse, you can be an EMT. We encourage them to see that once you get interested in a subject there’s more than one way to become a part of it.

The community show also draws some people into the theatre who had been reluctant to do so. They maybe were apprehensive about what to wear or what the audience protocols would be. But the desire to support their friends and families who worked on a show encourages to put aside those considerations and, we hope, learn that everyone is welcome and theatre isn’t scary. So the value of the community show goes well beyond just putting on a wildly enjoyable and heartwarming show.

E: Is there any last thought that you have for BTG and the impact that it’s had for you, and where you would like to see us go?

D: I’d like to see BTG go on for another 100 years. Broadly writ, it’s BTG’s impact on the individuals and the impact on the community on several levels: economically, culturally, and so forth. It’s important, yet under-appreciated. We’ve become so inundated by media-based entertainment which has less targeted impact that we almost have to separate ourselves from that. Live theatre is simply unto itself.

Support Live Theatre in the Berkshires and give a gift today!

Previous:
Reflections in March, 2022: My introduction to BTG Plays!
Next:
The Berkshire Flyer And the NYC/Berkshire Connection 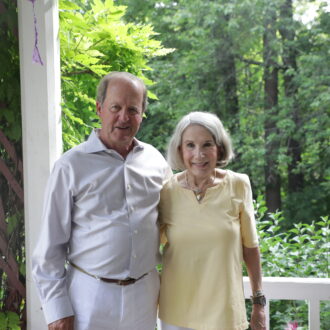 In Appreciation: A Conversation with Randy Hawthorne and Carliss Baldwin

By: Scout Swonger (They/Them/Theirs) In Appreciation: A Conversation with Randy Hawthorne  Berkshire Theatre Group is grateful for the dedicated board members past and present who have contributed their intellect, perspective, … Read On 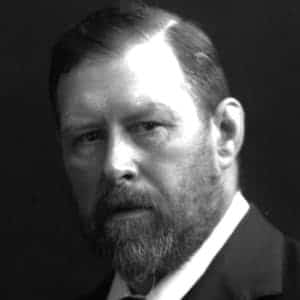 By: Scout Swonger (They/Them/Theirs) While vampires typically have their time in the spotlight (certainly not the sunlight) during Spooktober or in Twilight-related fan circles, Dracula has persisted as an evergreen … Read On

The Last Waltz Live is a recreation of the Band’s classic concert film featuring The Rev For Band ...

Celebrating 47 years of absolute pleasure! 🫦 Celebrate the anniversary of this cult-classic film ...

This week, a new adventure began! 🏰 Our students are back, now rehearsing Magic Tree House: The ...

The merry offerings include: The ...

We've got a variety events coming up at the ...

Shoutout from Eddie Montgomery of Montogomery Gentry! Party on with this country music star at the ...

Mondays are ruff 🐶🐾Meet Jolene, or JoJo, the 4 month old Beagle who was rescued from a ...

Happy National Arts in Education Week! The arts are an essential part of a complete ...

We all remember this day, where we were, how awful it was... and we still search for peace. May the...

#repost from @fionascruggs
✨ Two days away! ✨

Get your tickets for the Dancers of ...

THIS SUNDAY 💃🏽 Support emerging choreographers and dancers in this special dance performance!

Rehearsals have hit the shore for Edward Albee’s SEASCAPE! 🦎🌊 Directed by Eric Hill, this ...

“Of all Mr. Albee’s plays, Seascape is the most exquisitely written.” —The New Yorker
...

🌿DANCERS OF THE BERKSHIRES: THE MOMENT

Join these dancers on a journey through movement...

Happy Closing to SONGS FOR A NEW WORLD 🌎✨ You have two chances left today to experience a stage...