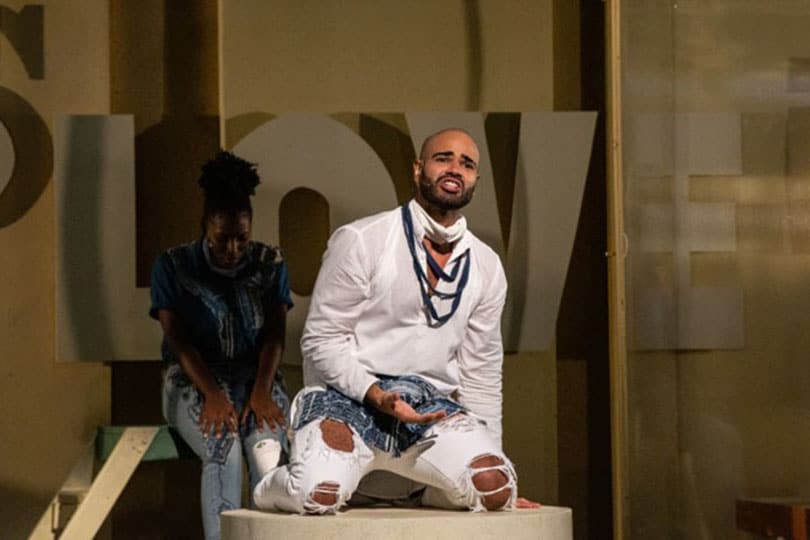 Can in-person theater return, safely, now? This ‘Godspell’ is the test case

Read the article at the Los Angeles Times

Masked audience members had their temperatures taken. Actors had their noses swabbed three times a week during rehearsals.

Now, opening night for Stephen Schwartz’s “Godspell” is finally here. Except not in the Berkshire Theatre Group’s 780-seat Colonial Theatre but in a 100-seat tent in a parking lot next door, with plenty of room to breathe easy.

You want a program? Look it up on your phone. Same for your tickets. And please don’t get up from your socially distanced folding chair until intermission.

Welcome to COVID-19 theater. Although the pandemic has taken a brutal toll on live performance, darkening Broadway and canceling regional shows from coast to coast, the Berkshire Theatre Group’s gutsy production of “Godspell” in Massachusetts has a unique distinction: It is the only musical in the U.S. approved by Actors’ Equity, the union representing 51,000 actors and stage managers.

For the artists, it’s a brave new world. (Full disclosure: My daughter is in the cast.) They perform six feet apart in the musical about Jesus and his disciples, flanked by plexiglass shields on wheels that protect them and the audience as they sing. For good measure, in their pockets they also have masks, which they put on periodically during the show.

In their 20s and early 30s, the 10 cast members have been quarantined in a house less than a block away. They never touch onstage, a predicament that veteran Broadway choreographer Gerry McIntyre has dubbed “choreography with a condom.”

So how did they go on with the show, in a season when so many other theaters folded their tents?

“The idea of a summer in the Berkshires without any kind of culture was just not acceptable,” said Lee Perlman, a New York healthcare executive and copresident of the Berkshire company’s board, who spearheaded the bid for Equity approval. “I thought it was important to see if a new model could be created, as this is not a short-term situation we’re facing. It seemed intellectually lazy not to try and make this work.”

If it does, the new production of “Godspell,” a much-loved 1971 musical by the composer of “Wicked,” with the book by John-Michael Tebelak, may offer eventually an outdoor model for live theater in California and elsewhere.

“The message is that theater can still happen with more than one person on a stage at a time, and it can happen before a [COVID-19] vaccine,” said Kate Shindle, Actors’ Equity president.

So far, audiences seem confident to return. The company characterized advance ticket sales as strong for the show, which runs through Sept. 4.

Getting to opening night was a struggle, however, because the union initially nixed the “Godspell” proposal. Undeterred, Kate Maguire, the Berkshire Theatre Group’s chief executive and artistic director, argued that her production met state and Equity guidelines for opening a show, including strict protocols for masking, testing and social distancing.

Crucially, Berkshire County — a rural area with about 125,000 residents that’s home to the Tanglewood festival — has an infection rate hovering at 1.2%. But the key to winning approval was a 30-page manual that Maguire wrote to protect performers and audiences.

“We worked collaboratively with Equity and showed that we could do this,” she said. “We couldn’t just throw up our hands and do nothing. I wouldn’t be dismissed.”

The union’s green light for her show as well as a one-man play by the Barrington Stage Company (another Pittsfield troupe) came in July. That gave “Godspell” less than four weeks until Friday’s opening, a high-stakes pressure cooker for everyone involved.

The production, suddenly attracting national media attention, is set during the pandemic. And the actors have forged a remarkable bond.

“I’ve never seen a cast so together, so dedicated,” said Emily Koch, whose Broadway credits include “Wicked” and the national tour of “Waitress.” “We’ve run through lines together as a group even in hours when we’re not working. That doesn’t happen a lot in professional theater.”

Driven by a folk-rock score, “Godspell” tells the story of 10 people whose lives are in chaos, and their search for community through love and understanding.

From its rousing opener,“Prepare Ye the Way of the Lord,” an old story is told in new ways: Director Alan Filderman stages a socially-distanced crucifixion with Jesus extending his arms, as rose petals fall from his dying hands.

Near the end, Jesus sings “Beautiful City,” a heartbreakingly beautiful anthem that Schwartz updated with new lyrics after the 1992 Rodney King riots in Los Angeles.

“It was another time when there was great anger and division, which led to great destruction,” he said, quoting some of the lyrics: “‘We can give up bitter and battered, or we can start to build a beautiful city.’

“We’ve had the vision, strength and courage to do that before in America,” said Schwartz, who plans to attend the show. “I have to believe we still do.”

Previous:
‘Godspell’ Review: Musical Theater Rises From the Dead – The New York Times
Next:
Live theater returns to the Berkshires in a changed world – The Boston Globe