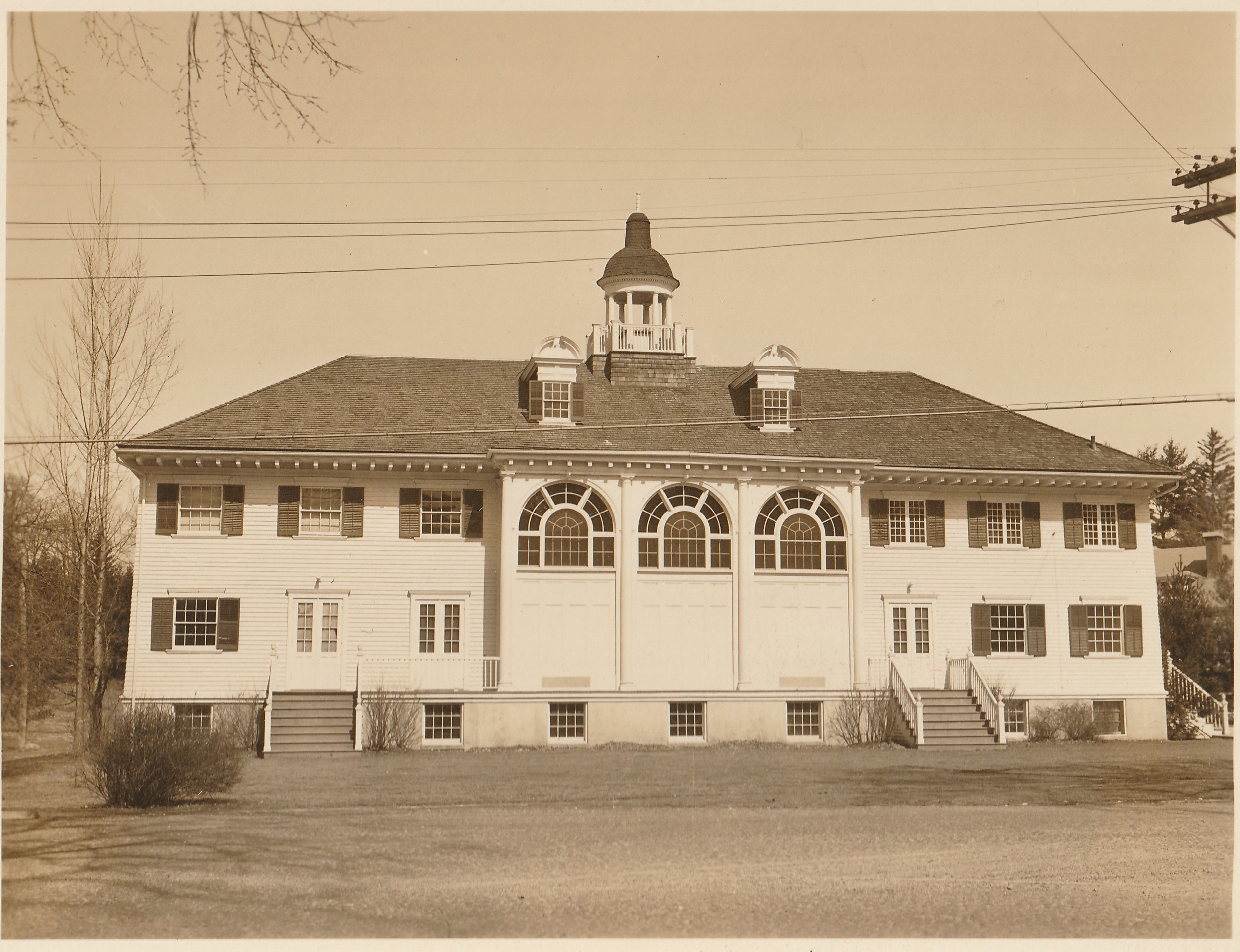 I love this location and living in Stockbridge. I brought up three children here. This is a very unusual place, it’s magical. The community and the physical beauty, not to mention there is so much to do in the summer—you have no idea where to go first! It wasn’t like that when I first got here in the 60s, though. This theatre has been here longer than I have. I was in A Matter of Position, back in 1968, shortly after moving here. When I came here 64 years ago, you had hardly anything. There weren’t as many restaurants or museums. Here I was, this big New York City girl, but of course, my husband was a paper chemist, so he had to work at a mill and they’re only in the country. I had no idea what I was going to do, but I’ll go on the record and say that I had the best life you could imagine here. We had 64 marvelous years here, and it’s the people you meet, famous and not famous, they’re just so interesting. We all just love living here. It’s a gorgeous place to land. (Pictured below: Newspaper article from The Lakeville Journal, 1968 featuring Arthur Penn and Elaine May in rehearsal for A Matter of Position.) 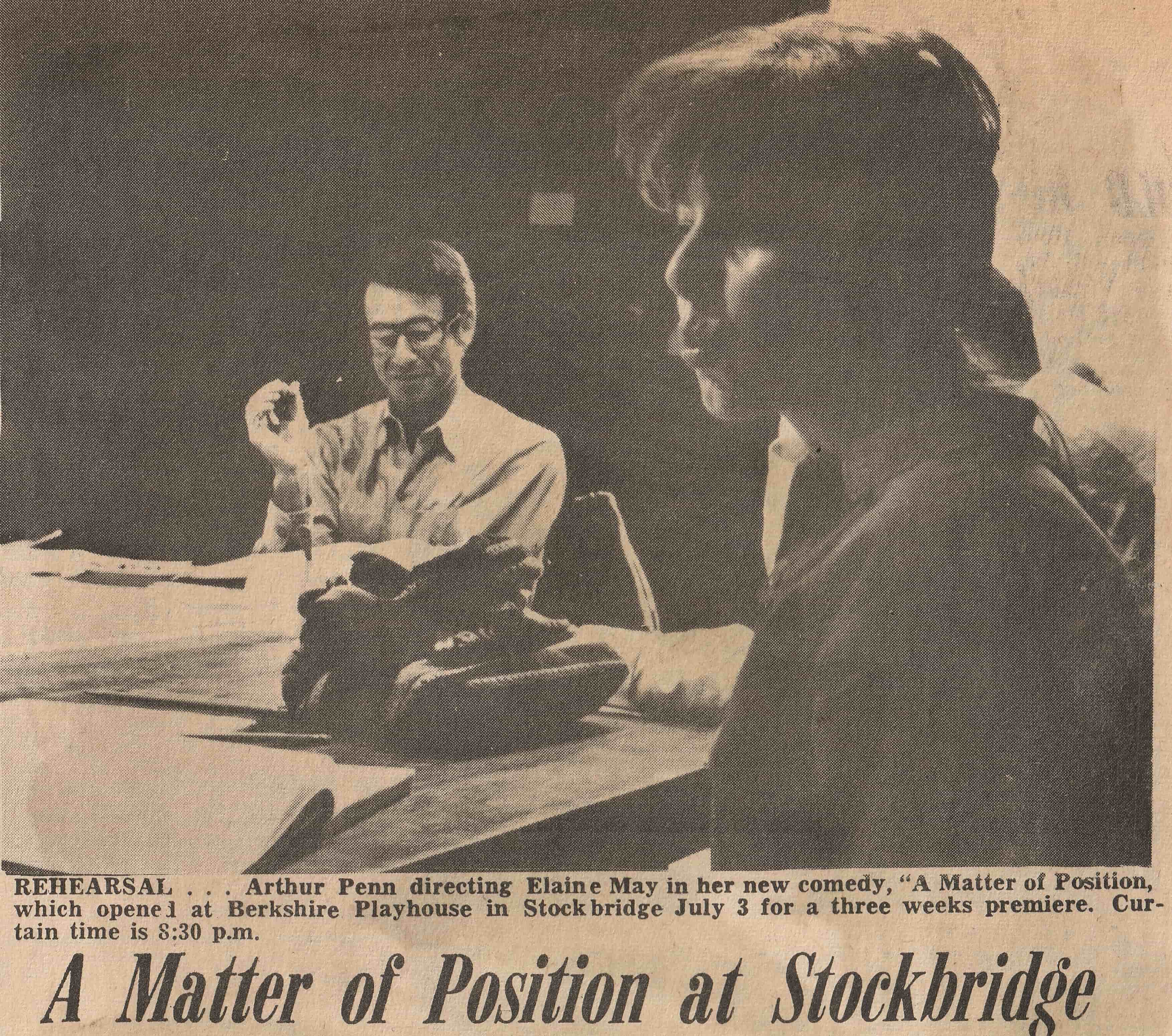 One day my husband was at the Post Office, and the director of the Austen Riggs Center was there.

She said to my husband, “I want you to play King Creon in Antigone.”

He laughed and said, “You’ve got to be kidding me, I’ve never acted a day in my life.”

He was tall and very handsome and she shrugs and says, “you’ll be great.”

And he was. Never acted before, never took a lesson, he was a very bright and sensitive man. He did that and it was a huge success for amateur theatre at the Riggs Center. He subsequently went on to act with the BTF for many years after that and was in quite a number of wonderful productions with them.

Then about two years later she called me up and she goes, “I think you better sit down, I’ve got to ask you something. I want you to do Martha in Who’s Afraid of Virginia Woolf.”

And I did the same thing as my husband, I laughed and said, “I don’t do that, honey, I can’t remember lines. I can dance, but I don’t act.”

Finally, she said, “I’ll tell you what, have you ever seen it?” I said I hadn’t, and she goes, “I want you not to look at it. I’m going to bring up the play, and the four of you are just going to read it blind. And then if you don’t want, I’ll give in.” I was tougher than my husband, he was very eager, he got into acting and loved it. I was adamant that I didn’t want to do it. 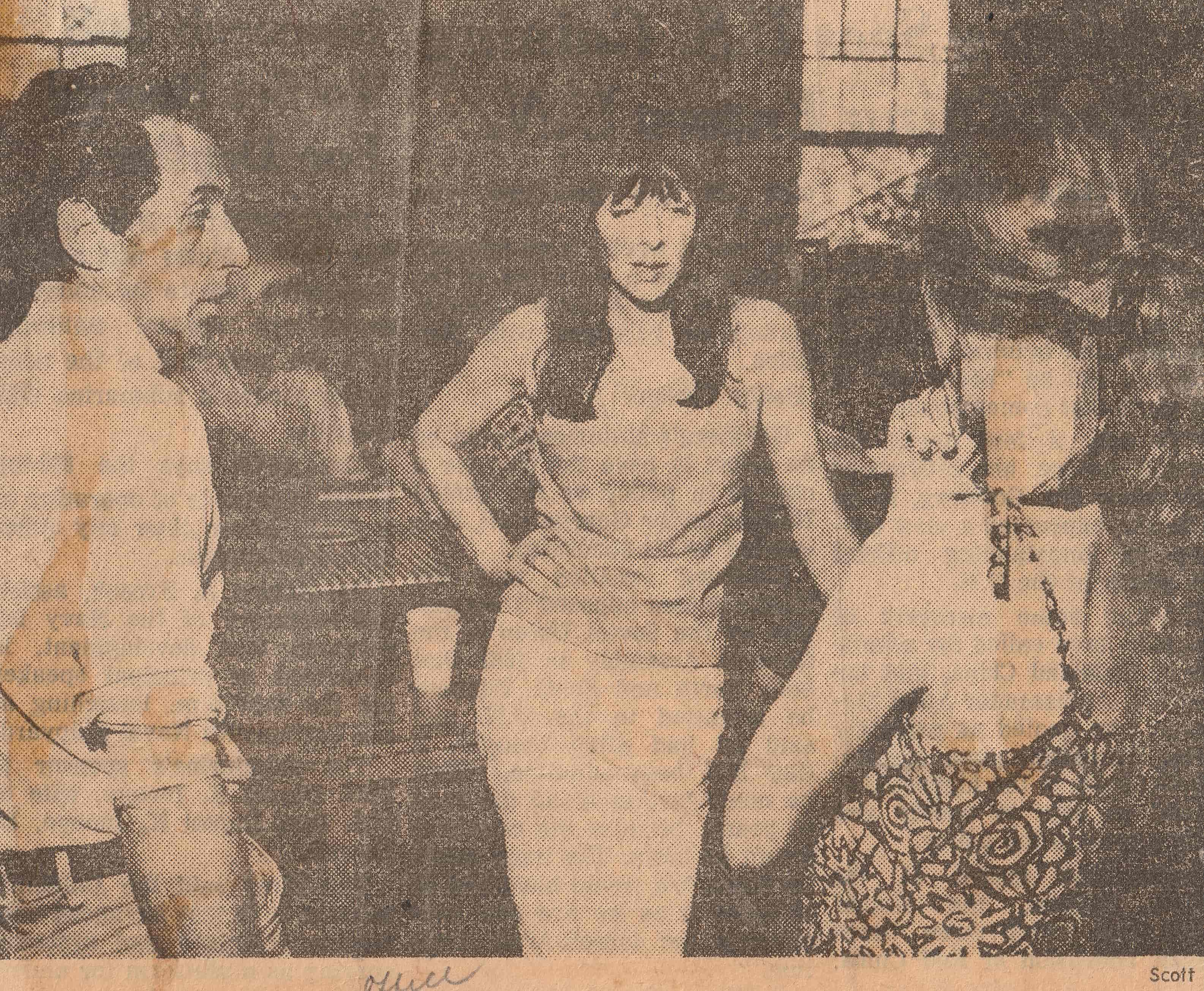 So, I let them come up and we read cold through the whole thing, and when it was done, nobody could say a word. That’s a very powerful play, and she said “Well guys, I’m committed if you are.”

And so, we did the play. We got some good reviews. I couldn’t let go for weeks! I loved it! Then my husband went on to do a bunch of different things, especially with Riggs. (Pictured to the left: Arthur Penn and Elaine May conferring with the Costumer for A Matter of Position.)

I was then asked by Arthur Penn to be in A Matter of Position where I played Elaine May’s mother. I feel very privileged to have been given that chance by Arthur Penn. The whole thing was like a gift dropped into my lap, and it was such fun! I had to work with Arthur Penn with nothing but Hollywood, equity, and television actors, and I would just sit in the corner and think I can’t do this, they’re all better than I am. But I absolutely had the best time! One of the actors, Alan Sues, who was a comic on Laugh-In, he said to me, “don’t get caught, only 3% of equity actors make a good living.” I couldn’t believe it was that small! 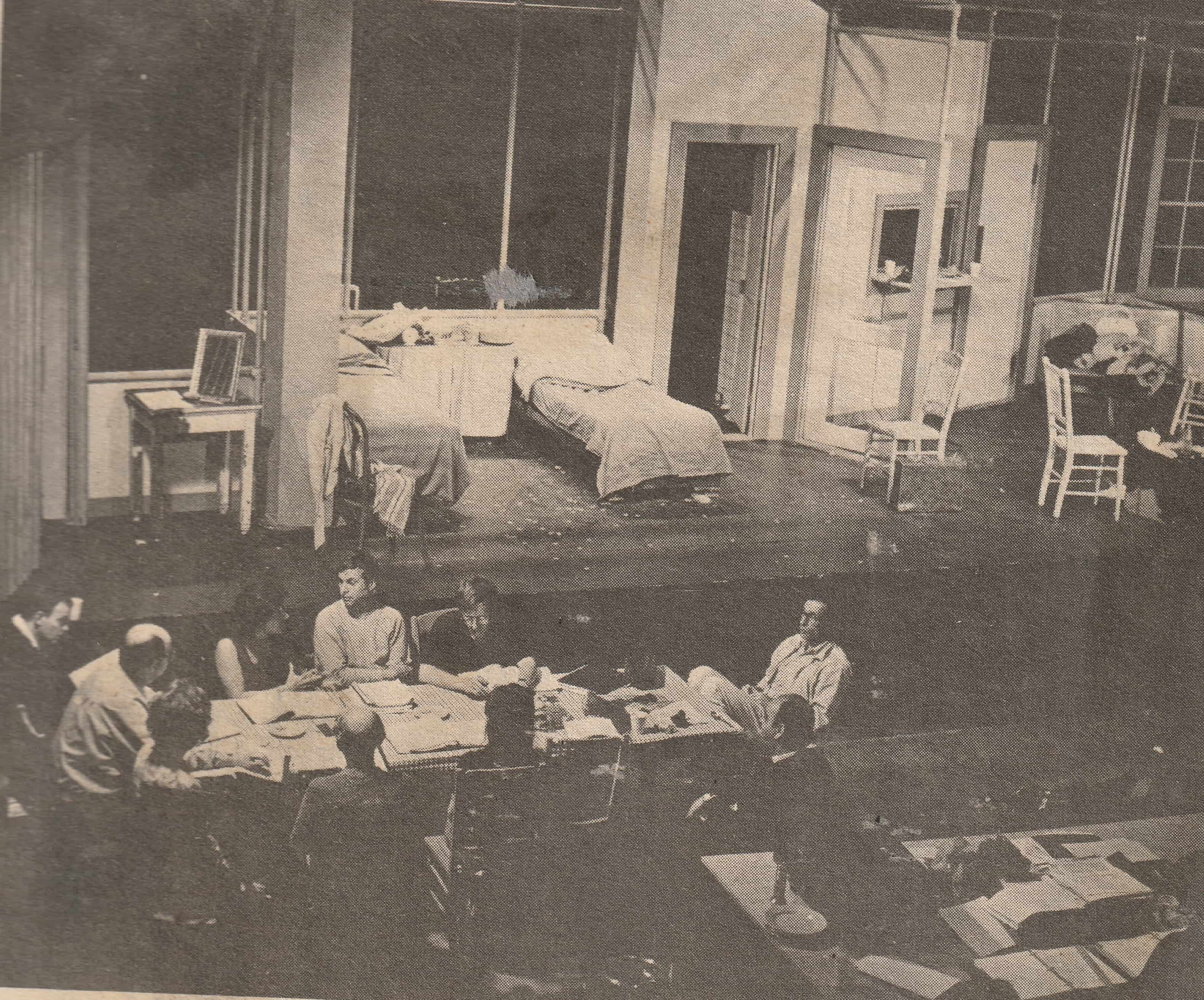 Arthur was one of the finest directors I’ve ever seen. I loved Arthur. What he did every director should do. He was very kind to his actors, and if he saw you invent a shtick that he liked, he’d leave it in. He encouraged innovation and play. I was rather uptight and nervous, and here were all of these Hollywood actors, and he would just come right over to me and tickle my stomach and say, “if you loosen up there you’ll be all right.” (Pictured to the Right: Rehearsal for A Matter of Position.) It was also so much fun to play Elaine May’s mother. Elaine May was a brilliant comic and she got together with Nichols, who became Nichols and May that had the funniest duets. She wrote the play, A Matter of Position, and it was quite funny because I was only a couple of years older than her.

Arthur was very big on building backstory and putting the scenes in context and exploring the subtext of each moment. One day he had us do an improvisation exercise as mother and daughter. At one point she turned around and said, “You sound just like my mother.” She didn’t sound too happy about that. I also enjoyed working with these experienced actors, Dorris Roberts and Jimmy Coco. I found that most actors are so much fun. They were more open than most people, they’re very warm. I got to know Elaine May and loved her. The play was a very important part of my life then. 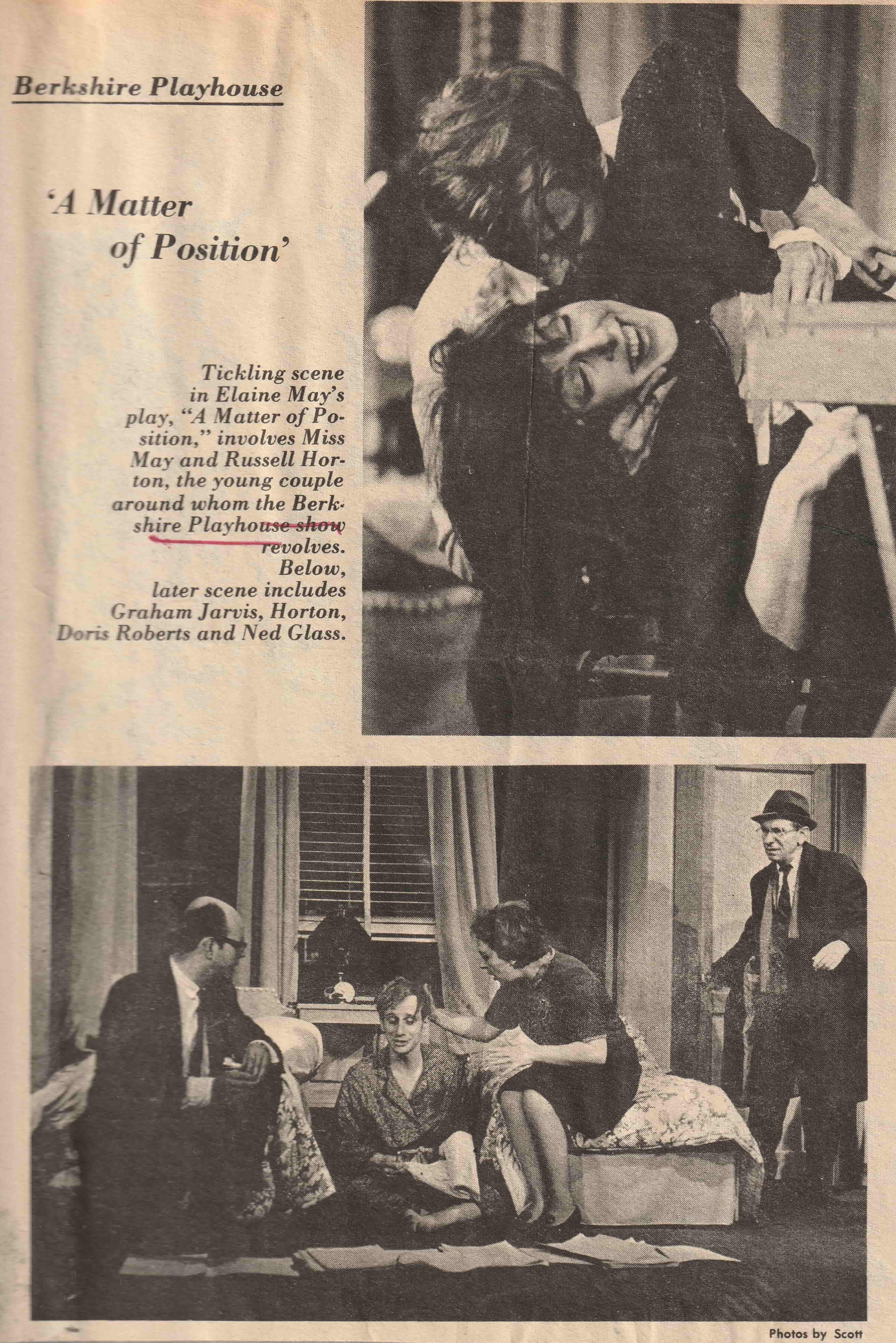 In those days, the late 60’s, we had a great deal of fun. My husband was on the board of the BTF and he knew everybody. During the ‘60s they brought up a roster of actors like you would not believe. With Arthur Penn’s connections, you had actors like Gene Hackman, Dustin Hoffman, Anne Bancroft, Estelle Parsons. They were all here on the stage. Arthur was darling and used to let me sit in on rehearsals and see these amazing personalities. The whole theatre at that time was very exciting.

I just went to see Coming Back Like a Song! I was hit in the right place. The play was fantastic, and the music was so familiar and nostalgic. It’s funny because the playwright, Lee Kalcheim, is married to one of my former students, one of my favorite students! One of my absolute favorite shows that I’ve seen there was Children of a Lesser God. It was so impressive, they did a magnificent job. I didn’t know anything about Joshua Jackson, I’d never seen his show, but I mentioned I was going to go see it to the lady who drives me around—I don’t drive anymore at my age—and she said, “Oh, I love that guy, he was in Dawson’s Creek!” So, I managed to get her a ticket, and she was in pig’s heaven. He and Lauren Ridloff did such a great job. 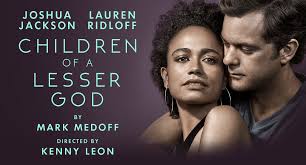 It was a wonderful coincidence that Kenny Leon was the director. I actually knew him 20 years ago when I lived in Atlanta, he was a good friend of mine. Of course, he had no idea I lived here, and I thought he’ll never recognize this old lady! The first day he came, I’m waiting at the theatre, and he hadn’t changed a bit. I’m waiting to see if he’ll even recognize me. He gets out of the car, looks at me as if it’s only been 2 minutes, and says, “What are you doing here?” I said, “I live here, what are you doing here?” So, we renewed the friendship with a lot of hugs and kisses. That production was the best thing I’d seen in years. Now, Kate has really built a wonderful theatre. She gives wonderful talks and makes the theatre accessible so people really want to go.