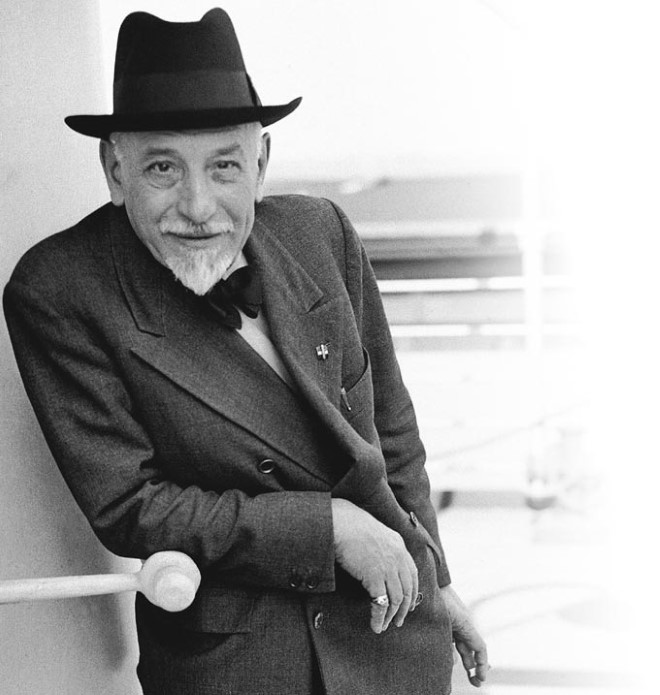 Luigi Pirandello (pictured above) was a prolific writer who wrote over fifty plays, six novels, a variety of poems and countless short stories. He won the Nobel Prize for Literature in 1934 and is considered one of the most influential writers of the 20th century, with his plays being the forerunners to Theatre of the Absurd. Throughout all of these achievements, Pirandello lived and worked in a world that was constantly shifting and uncertain.

As the rest of the world moved into the industrial age, Italy lagged behind. Pirandello’s Sicily was one of the few states in the south to prosper from industry, and both his father and father-in-law were wealthy sulfur merchants. This freedom of wealth allowed Pirandello to pursue a university degree, and he graduated from the University of Bonn in Germany with a Doctorate in Philology. 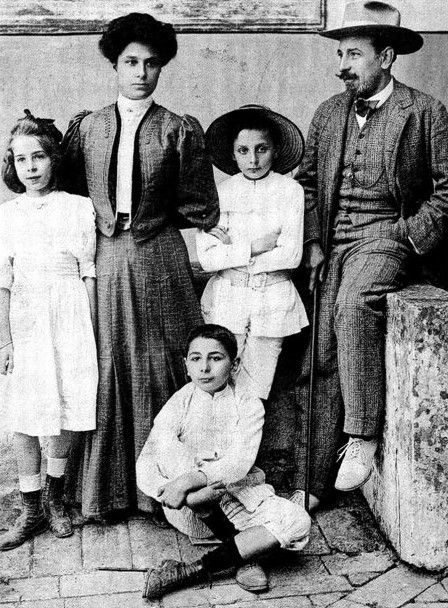 All seemed to be going smoothly in Pirandello’s life as he was then married off to the daughter of another wealthy sulfur merchant, Antonietta Portulano, thus giving him the freedom to pursue his writing not for money, but for art. (Pictured to the left, Pirandello and his family, 1901.) This idyllic life came to a swift end in 1903 when a landslide destroyed the sulfur mine responsible for his and his wife’s wealth, effectively bankrupting Pirandello and his wife. He was forced to begin writing for money and took up teaching at a school in Rome. This event also led to the mental deterioration of his wife. Now raising two sons and a daughter with an unstable wife and no financial stability, Pirandello faced a new reality that he explored in his novels.

The start of WWI dramatically changed his life yet again. Italy joined the war in 1915, and both of Pirandello’s sons were called to fight. This was the year that Pirandello’s mother died and his son Stefano was captured and held prisoner by the Austrians. His second son, Fausto was unable to join the war as he was diagnosed with tuberculosis. Struggling to pay for a sick son and ailing wife, Pirandello began taking commissions, including a play for the Sicilian theatre that sparked his most productive period of playwriting and resulted in the plays that made him famous.

Fausto recovered, and Stefano returned home in 1919. Rather than a joyous reunion, it was bittersweet as Pirandello finally succumbed and committed his wife to a sanatorium. Pirandello no longer had a reason to remain rooted and began a nomadic life traveling from hotel to hotel, writing and attending performances as around him Italy swelled with chaos and confusion. Fascism began to take root and in October of 1922, Mussolini was appointed the Prime Minister of Italy and given permission by the Emperor to dissolve the current Parliament and reform a new government.

Just one month later, the first production of Naked took place at the Teatro Quirino di Roma. In 1921, when asked to comment on his work, Pirandello stated:

I think that life is a very sad piece of buffoonery; because we have in ourselves, without being able to know why, wherefore or whence, the need to deceive ourselves constantly by creating a reality (one for each and never the same for all), which from time to time is discovered to be vain and illusory…. My art is full of bitter compassion for all those who deceive themselves, but this compassion cannot fail to be followed by the ferocious derision of destiny which condemns man to deception.

This sentiment is seen throughout the majority of Pirandello’s plays. It is easy to see how the chaotic nature of his own life and that of his country could foster such a worldview. His own words from Naked could be said to best describe his life, “What a lesson for the artist. One struggles to reach a higher plane…yet always, the street is there…the mud, the noise, the blank faces, the repulsive intimacies. I plan the perfect story. Then the blare of a horn intrudes.” Pirandello’s own perfect story was rudely interrupted at every turn, and yet his works emerged from the struggle to reach a higher plane, and continue to influence and shape theatre to this day.

Previous:
BTG’s Garage from Cars to Comedy
Next:
The Colonial Chronicles: Interview with Bill Munn