Galleries, Displays and Collections: A History of Visual Art at BTG 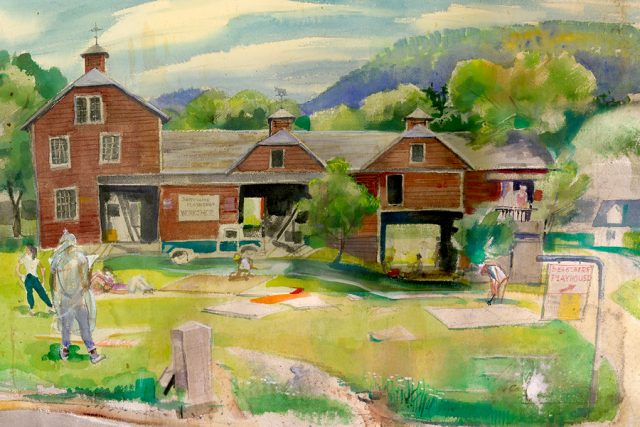 Watercolor of The Unicorn Theatre by Jack Coolidge, Jr., depicts a day at the Berkshire Playhouse during the summer of 1958. Coolidge often showed at Peggy Best’s studio in Stockbridge.

Art at the Casino 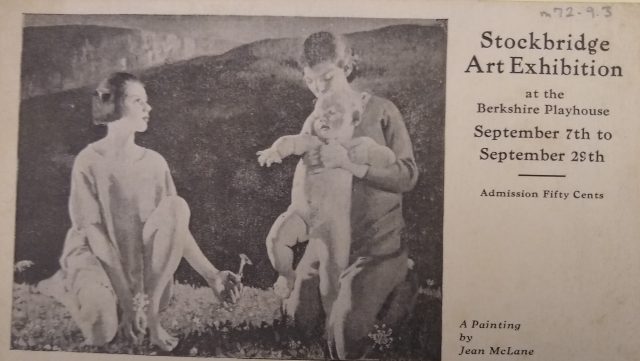 Card showing a painting displayed at an Annual Stockbridge Art Exhibition. From the Historical Collection of the Stockbridge Library.

Exhibits at the Playhouse 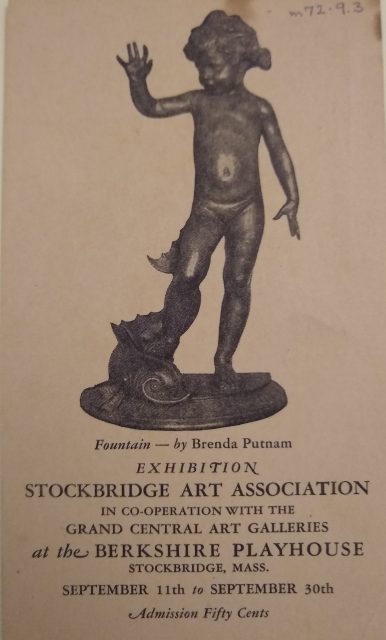 Card showing a sculpture showcased at the 1928 Annual Stockbridge Art Exhibition. From the Historical Collection of the Stockbridge Library.

Berkshire Playhouse officially opened its doors on June 4, 1928. The first season drew crowds from across Berkshire County, Connecticut, and New York. While the new theatrical venture was flourishing, an old Stockbridge tradition was being revitalized. Many members of the Three Arts Society, who owned and founded the Berkshire Playhouse, had also been involved with the Stockbridge Art Exhibition since its first year. Naturally, they continued the tradition of hosting it in the Casino building, according to a New York Times article from September 16, 1928:

The Stockbridge Art Association opened its twentieth annual exhibition last week…This is a joint affair, in which the Grand Central Art Galleries of New York cooperate with artists living or working in the Berkshire Hills. Seventy-five artists participate in a representative show that is attracting visitors in large numbers.

Artists from the 1928 exhibits include: Rosina Emmett Sherwood, Monterey School of Art, Emily Winthrop Miles, Wiliam Carrigan, Daniel Chester French, Lydia Field Emmett, and Walter Wettleton. Throughout the 1930s, the annual exhibit was often hosted at the Playhouse, though it was also occasionally hosted at Williams High School during this period.

Displays and Galleries at Berkshire Theatre 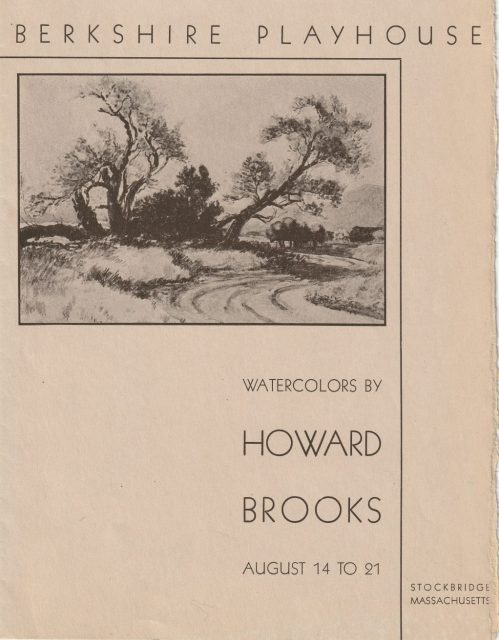 Program for an exhibition of Watercolors by Howard Brooks.

Throughout the next few decades exhibits were hosted in the gallery on the second floor of the theatre, the mezzanine level, “At Stockbridge, in the Berkshire Playhouse, a series of eight small [art] shows, each lasting one week. The first…is made up of work by Albert Sterner” (New York Times, 1934). In the 1960s Peggy Best, who had a gallery in Stockbridge, MA organized an exhibit of local artists to be hung in the Berkshire Playhouse. Given her close association with Norman Rockwell he “gladly lent her a painting” according to Deborah Solomon’s biography, American Mirror: The Life and Art of Norman Rockwell.

The second floor of the Fitzpatrick Main Stage (Berkshire Playhouse) is used today to showcase the art of the designers for each of the summer shows, this year will feature the designers for The Skin of Our Teeth and What We May Be.

The Colonial Theatre in Pittsfield, MA is now home to rotating exhibits in partnership with Stephanie Cohen, BTG’s Visual Art Curator and a Berkshire based artist. The exhibits began in 2017, “I approached Kate Maguire about having a ‘Nasty Women Art Exhibition’ at the Colonial Theatre in Pittsfield to be a part of an international Nasty Women art exhibitions,” Cohen said of the origins of the exhibits. The exhibit was well-received according to Cohen, “The Opening Reception was a huge success with 90 artists…participating, 600 people attending and over $6,500 donated to the ACLU of Massachusetts and the Berkshire County League of Women’s Voters through the art sales!” 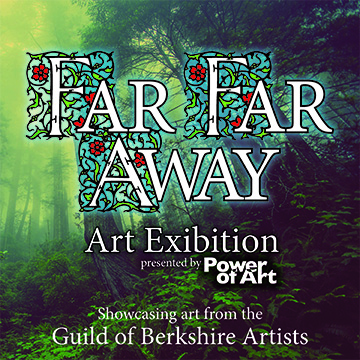 With the clear success of the first show, Stephanie Cohen and Kate Maguire decided to continue the exhibits. Each of the 8 exhibits done so far has given a portion of the proceeds to charity. When asked about the impact and design of the exhibits, Cohen said:

In the Art Exhibitions that we have mounted since the initial Berkshire ‘Nasty Women Art Exhibition’ we have showcased the art of roughly 150 artists, and donated over $9,600 to Berkshire or Massachusetts-based organizations. The artists, recipient organizations, and the community all appreciate this collaboration. It integrates visual art into the Colonial, a beautiful, historic center for the arts in Berkshire County. It literally fills the Colonial with color and beauty and artistic expression. It provides an opportunity for artists to exhibit and sell their art. It raises community awareness about the many organizations in our midst that are doing important, and often under the radar work for our community, and it helps these organizations raise much needed funds.

The next show, “Far, Far Away Art Exhibition,” opens on July 15, with an opening reception on August 2. The exhibit will feature art from the Guild of Berkshire Artists and run through September 9. A portion of each sale benefits both BTG PLAYS! and Berkshire County Kids Place.