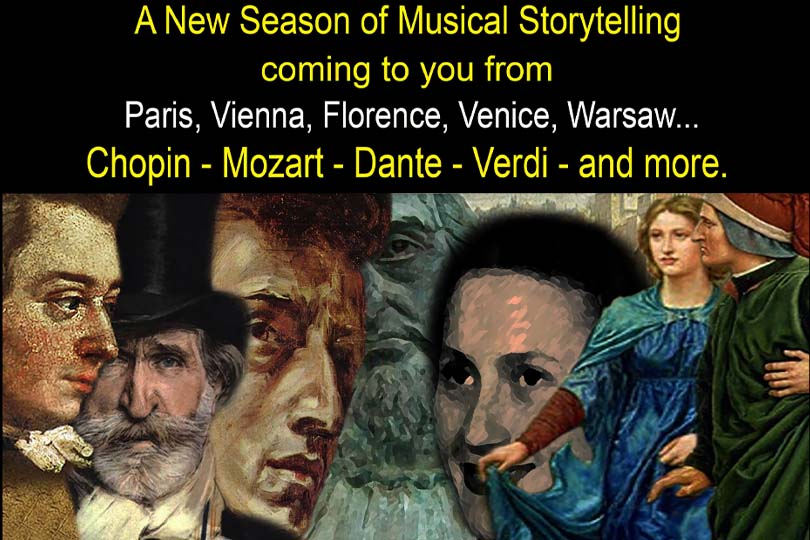 BUY THE SEASON PASS AND SAVE

Dante and Beatrice in Florence

This film tells the story of Italy’s greatest poet, Dante Alighieri, and his muse Beatrice. The heroine of Dante’s The Divine Comedy is Beatrice whom he met but only twice in Florence, once when he was nine, and again when he was eighteen. But Dante was so smitten with Beatrice that she remained his ideal love for the rest of his life.

Our story begins in the little church that still stands in Florence where they first met more than 700 years ago. Known as the “Chiesa Di Dante,” it is where Beatrice is said to be buried. Next to Beatrice’s tomb is a basket, where for hundreds of years notes of hope, dreams, heartbreak and love have been left by visitors with open hearts asking for Beatrice’s blessing. One of those notes is a mysterious old musical manuscript and it is there that our adventure begins.

Mozart and Figaro in Vienna

Premiering January 9, 2022, about the outrageous collaboration between Wolfgang Amadeus Mozart and Lorenzo da Ponte that created the perfect comic opera, The Marriage of Figaro.

The world first heard and saw The Marriage of Figaro in Vienna in 1786. The opera is considered by many the first and perhaps only perfect opera borne of a staggering collaboration between Wolfgang Amadeus Mozart and Lorenzo da Ponte – a Jew, a Priest and a Brothel owner all rolled into one. Da Ponte had been banished from Venice due to his low-rent behavior and he ended up in Vienna, where he was introduced to Mozart by Mozart’s landlord, a mutual acquaintance of both. Finding each other full of jokes and high-jinks, with Mozart at the helm, the two of them decide to take a banned play by the French writer Beaumarchais and turn it into the greatest and most beloved opera ever composed

Venice, Teatro La Fenice, Guiseppe Verdi’s opera, La Traviata, has its opening night. Would a story about a courtesan dying of consumption; sung by a soprano too “ample” to be consumed by anything; and a cast of characters that seemed to have wandered into the theatre off the street, survive the most vicious public shaming that an opera had ever seen? Even Verdi himself wasn’t sure.

Premiering May 29, 2022, featuring the San Diego School of Creative and Performing Arts and telling the real-life story of  Holocaust survivor Eva Libitzky’s visit to diverse urban schools and the shocking events that occurred.

The true story of Holocaust Survivor Eva Libitzky, who spent her post-war life in America visiting primary and secondary schools throughout the United States to tell her story. At one particular school, a diverse group of students, who study music but are unaware of the events of World War II, gather at an assembly to “honor” their guest with music. As Eva’s story reveals itself, there is a shocking turn of events, where everyone present finds themselves reliving a very terrifying past.  (In collaboration with the San Diego School of Creative and Performing Arts.)

Based on the well known play, Monsieur Chopin, and filmed in Paris and Warsaw, Hershey Felder recreates Paris 1848, at the time of the revolution where the great Polish Composer-Pianist, Fryderyk Chopin, gives a piano lesson that reveals his secrets about music, and even more so, secrets about himself.

Premiering October 16, 2022, set in Avila, Spain, and focusing on 13th century Jewish mysticism that is the basis for Kabbalah.

In the 13th century, the medieval walled city of Avila, Spain, was home to hundreds of Jewish Mystics, among them Moses de Leon, author of The Zohar—the work of literature upon which the Kabbalah—Jewish Mysticism—is based. Red strings tied around wrists and other such fanciful actions are only but a tiny part of a little known story that is sure to surprise, delight and elicit a great deal of wonder of a wild mystical world.

A Musical Surprise for Holiday Time

Premiering December 18, 2022, the subject of which will be decided by viewers who have purchased season tickets.

Over some 30 years, patrons have asked for productions telling the stories and featuring the music of composers and musical stars throughout the ages.  For our season closer, the artist chosen to be featured will be based on patron choice. When you purchase a season ticket, you will be able to send us your request, which we will officially register. One request per ticket. The composer/artist with the most requests will be the subject of our second season closer, the only requirement being that the composer or musical artist must no longer be “with us.” Winner(s) of this audience event will be granted a walk-on role in the filmed production, all expense paid travel and lodging to location of production for five days.